The age-old Indian traditional jewel, the nose stud, has made a major come back in the recent times. And it really is no surprise that the whole world is so in love with this little trinklet, for all the exquisite beauty and elegance it brings to the wearer. Gold, diamonds and pearl nose studs have always been a constant favourite with the Indians while metal nose studs seem to have taken over the traditional old gold ones in the rest of the world.

Pearls can be great as any jewellery but as nose studs, pearls are really the best. Nose studs are supposed to be shiny and cute, most of all minimal. And pearls are all these. They can make for the most beautiful nose studs, be minimal, classy and elegant all at the same time. 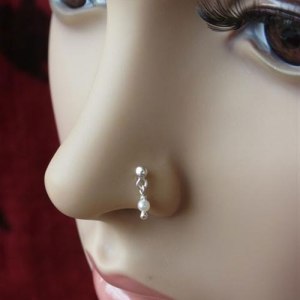 Whether it’s a single pearl nose stud or a pearl dangling off from a gold nose stud, all the glow and sheen that pearls radiate makes them the perfect choice for a nose stud.

And naturally, they make for the perfect wedding-jewellery-material

A bride is never completely made up without wearing a nose stud and it’s pearl nose studs that brides and bridesmaids always seem to choose. Mixed up with coloured stones and crafted along with gold, the beautifully designed pearl nose studs that are made especially for Indian weddings are just way too irresistible and perfect for weddings.

Wearing a Pearl nose stud has got health benefits as well

It turns out that nose studs weren’t just worn for beauty, there is a health benefit that is associated with it, just like there is with ear piercings. Piercing the left nostril is known to help keep the reproductive system of women healthy. Along with that, wearing a gold nose stud helps with air purification even before it enters the lungs as gold has got the property to eliminate Carbon dioxide. If pearl is your birthstone, wearing a pearl nose ring with a golden stem is all the more beneficial.

In the ancient days, nearly every woman in India would have her nose pierced. And this tradition is believed to have started only after the Mughals entered India as it is originally a Mughal tradition. Quickly, the tradition spread throughout the country.

In south India, large nose studs made of diamonds or pearls woven into the shape of a swan usually were worn by most women. In the northern India, the naths (or the circular nose rings) made of gold and pearls were usually worn. While most still continue the tradition, off late, the practice of piercing noses experienced a revival.

Actually, it wasn’t really that much of a revival as people never really stopped wearing this beautiful jewel ever since it was first worn. Because, among all the kinds of jewellery that was worn by our ancestors, nose studs really are the prettiest.